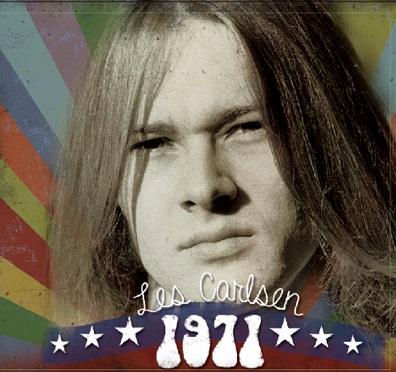 “While touring as the lead role Claude with the Broadway musical Hair, Les put together material for an album with a group of musicians from Seattle. It was recorded in 1971, but never released until now. It was the first album ever recorded by Les, a lost treasure found on cassette and remastered by David Zaffiro. The song BAD CREDIT was reworked and retitled as IT’S ALRIGHT and recorded along with the song CHANGING ME by BLOODGOOD on OUT OF THE DARKNESS. Flesh Failures and Let The Sunshine In were original Hair songs. Les originally wrote the song CHANGING ME for a clothing store in Miami back in 1971 in exchange for clothes from their store including those stars and stripe pants that he’s wearing on the back cover and disc face. Hair influenced Les’s theatrical approach to all his music. Les’s vocals sound very young but the Les Carlsen ‘sound’ is unmistakable. The primal scream in SOMEDAY is a foreshadowing of the signature screams in later BLOODGOOD material.” -Girder Records

TRACK LISTING:
Valley Of The Shadow
Elevator Operator
Hello There
Can You Hear Me
Flesh Failures – Let The Sunshine In
Lay Me Down
Bad Credit
Someday
Changing Me
Battle Fatigue