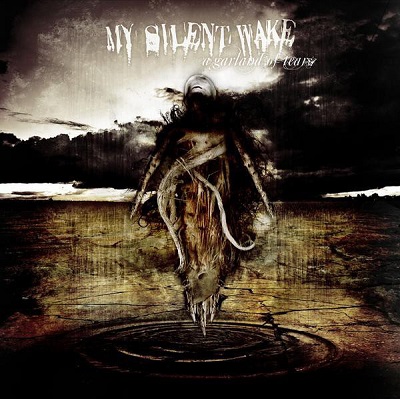 A Garland Of Tears

“My Silent Wake, having risen from the ashes of legendary British death/doom outfit Ashen Mortality, has excelled at breaking the boundaries of traditional death/doom… My Silent Wake’s third album takes another strong step forward in the band’s quest to blend unique melodies with strong and memorable arrangements without forsaking the wall of sound for which they are already well-known. Each of the 7 songs (most clocking in at over 8 minutes apiece) are carefully crafted, featuring a wide variety of vocals, including Ian Arkley’s trademark baritone snarl, clean vocals from Ian, Andi and Kate and more blackened vocals from Jason (listeners were given a taste of this on Anatomy). The guitars soar with excessive, heavy, chunky riffage on the harder songs and delicate soundscapes on the softer numbers. Kate, an extremely well-rounded classical musician, adds a great deal of musical depth and spirit that is typically lacking from an extreme metal release. The drums and bass also shine through like never before, causing the entire composition to flow and possess a more organic feel amidst the brain-pounding it induces. A Garland Of Tears is easily My Silent Wake’s strongest album to date and is one of the freshest releases in the death/doom scene in quite some time. Fans of My Dying Bride, Candlemass, Trouble, Paramaecium, Dead Can Dance and all self-respecting fans of death, doom, gothic, metal or just great heavy music owe it to themselves to pick up this fantastic release.” -Bombworks Records

TRACK LISTING:
Tunnels
Cruel Grey Skies
Pendulum
By My Own Hand
Fall Of The Flightless
Fallen Leaves
Wilderness Of Thorns