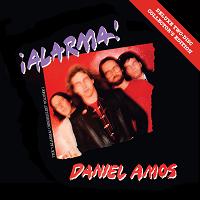 “Stunt Records and Born Twice are pleased to announce the release of the deluxe re-mastered 2-disc Collectors Edition of one of the most important albums in Christian rock history — Daniel Amos – Alarma! In addition to a brand-new re-mastered version of the original album, which brings out the depth and sparkle of this brilliant production like never before, fans get a 21-song bonus disc with unreleased demos, outtakes, alternate mixes, instrumental tracks and a 7-minute reading of the Alarma Chronicles Part 1 by Malcolm Wild. Included in the full-color 2.-page booklet are many unseen photographs, all the lyrics, the full text of Terry Taylors Alarma Chronicles-Part 1 and a center spread of Alarma memorabilia. This is the 4th collaboration between Stunt and Born Twice with more to come in the near future. A review from its initial release in 1981: “Alarma is the most exciting Christian release of the year. It might even be considered the most significant album in the genre of Christian rock. With this release Daniel Amos, one of the few Christian bands on the cutting edge of musical tastes in the 80s, has stepped to the forefront in the field of contemporary Christian music.” This has proven true 32 years on. This album influenced dozens of bands, not just in the Christian music field but in the mainstream arena—bands like U2, Collective Soul, The Ocean Blue and many more.″ -Born Twice Records