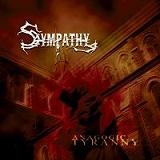 “Technicality and brutality have a head-on collision on the latest release from Sympathy. Hailing from Canada, the brainchild of Dharok has been a force in the extreme metal underground for several years now. Having already released 2 critically acclaimed full lengths and an EP while essentially being a 1-man band, Sympathy returns with a third full length that sees him reaching out and adding other musicians to the mix, including Jeff Lewis (Abolishment Of Hate, Mortification) and Jim Austin (Into Eternity) on drums. As a result, Anagogic Tyranny is the band’s most cohesive sounding album yet. Dharok takes his trademark mix of aggressive thrash, technical brutal death and harsh black and ups the ante with songs that take his sound to an entirely different plain. The compositions are more complex, the playing more technical (featuring some of the fastest playing Sympathy has ever performed) and the songs are unpredictable, as elements of black, death, thrash, doom and orchestral elements are melded together. The guitars are absolutely crushing and the leads by Jeff add delicious layers and textures to the compositions. One of the biggest changes is Jim’s drums, which are powerful, aggressive, technical and in your face. While being fast, brutal and technical, the music can be very atmospheric at times, featuring lush musical landscapes to keep the listener interested. Anagogic Tyranny is easily the best release that Sympathy has put out to date and its unpredictable, fast and furious pace will make your inner metal being giddy with pleasure. Sympathy’s blackened death sound is recommended for anyone and everyone who even thinks they are a fan of extreme metal and fans of bands like Suffocation, Immolation, Morbid Angel and Dimmu Borgir will find a new favorite band to love as they are throttled with the full on brute force of Anagogic Tyranny!” -Bombworks Records

TRACK LISTING:
Insurrection
And All Flesh
On A Bloodied Cross
Ours The Grave
Perfection In Death
Enslaved By Depravity
Underworld
Forgotten Temples
The Iscariot Aspect
Potter’s Field