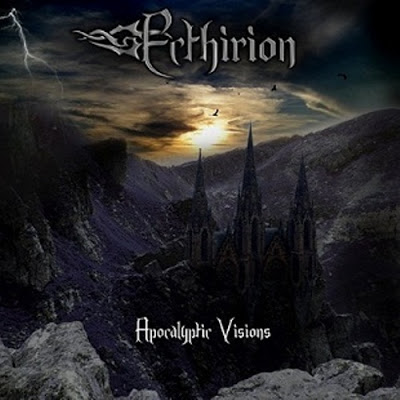 Soundmass is pleased to be releasing the debut 5-track EP, “Apocalyptic Visions”, for Ecthirion on May 22, 2009. With guest vocals by Eugen Dodenhoeft (Far Beyond) and Azahel Frost (Frost Like Ashes) and operatic vocals by Josh Edwards, expect epic orchestral metal with Vviking and black metal tendencies.

A new band hailing from the United Kingdom, Ecthirion’s aim is to write broad and unique music. Describing their own style, the band says “Hopefully it is something unique and thought provoking. We try to think outside the box and not be cliché. Our music combines elements of all styles of metal including the extremes, as well as baroque music, film music, folk music, eastern music and Spanish music. Most of these styles can be heard on the EP.”

Recommended for fans of Dimmu Borgir, Turisas, Freedom Call and Far Beyond.