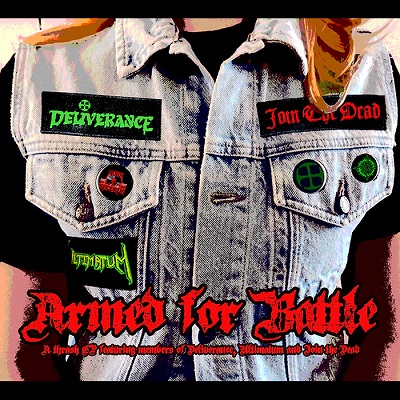 “Thrash fans unite for this very limited pressing of the very last recording from Bay Area thrashers Join The Dead. The band has officially called it a day, but before they did they recorded one last tune! ‘Walking In Darkness’ was recorded and was supposed to be a track on the next album from Join The Dead, but that never came to be. This thrash tune was just too good to go unnoticed so we decided to put it out on a special limited edition 7″ single. We decided to make it extra special and on Side B there are 2 additional rare tracks. The first track is a previously unreleased version of a Deliverance cover song entitled ‘What A Joke’. The second track is another Deliverance cover song for the track ‘It’s The Beat’, originally released on the 2009 Michael Phillips solo album ‘Mirrors Within Mirrors’. Both of these very cool cover tunes feature Michael Phillips on guitars and bass, Jim Chaffin on drums and Scott Waters on vocals. This 7″ is limited to 150 hand-numbered copies and will not be pressed again.” -Roxx Records

TRACK LISTING:
Side A
Join The Dead – Walking In Darkness