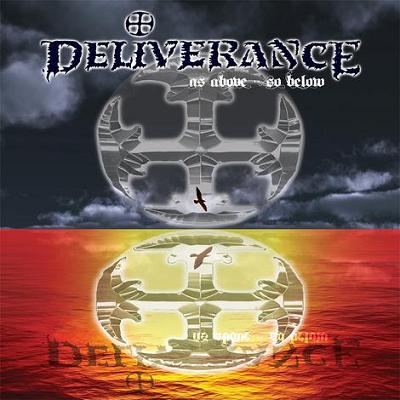 As Above So Below (re-issue)

“This 2019 CD re-issue features all new artwork that reflects singer Jimmy Brown’s vision for the original release but was never accomplished. Since their thrashing 1989 debut, Deliverance has been breaking new ground wherever and whenever they decide to make their metal presence known. The video for “Weapons Of Our Warfare” was the first Christian video to ever get airplay on Headbanger’s Ball. And when the band stepped away from speed metal and thrash in favor of progressive metal in the mid 90’s, they ascended to musical and artistic brilliance without peers. From the very beginning, Deliverance enjoyed both commercial and critical success that allowed them to dominate the Christian market as the most distinguished heavy metal band on the scene, period. Over a decade of aggressive touring, exposure in the mainstream markets and 12 albums later, Deliverance continues to hold icon status among legions of metal enthusiasts worldwide. In spite of years of rumor-filled message boards and relentless requests from fans, this is the first new Deliverance album from vocalist Jimmy Brown and company since 2001. Never has Retroactive Records been privileged to release an album met with such fan appreciation and unbridled anticipation! Jimmy knew how high fan expectations would be for a new release and has worked relentlessly with the band for over a year to deliver Retroactive Records an album that would not only delight but astound fans… an album that would hold up under the most scrutinizing fan critique. Jimmy’s goal was to create the greatest Deliverance record of all-time; a culmination of a brilliant career, while continuing to break new ground. As Above ~ So Below is a prayer that things would be on earth as they are in heaven. Musically, this 13th album represents a unilateral step forward in the heavy music genre; few groups have ever blended epic thrash/speed metal with the elegance and beauty of progressive metal (later period Deliverance) with such devastating skill and brutality. Never has a Deliverance album alternated so many moments of beauty (e.g. The Omen inspired opening track) with beastly moments of metallic fury and spine snapping riffs that would seem right at home on a Slayer, Believer or early Deliverance album. The end result is one of the heaviest Deliverance albums yet. Jimmy continues to deliver vocal melodies that are as commanding as a thundering voice from above. What no one could have anticipated is that the band would deliver one of the most enormous-sounding metal records ever made. In our minds, it seems like the album is a piece of heaven here on earth which, ironically, means that the album is an answer to it’s own prayer!″ -Retroactive Records

TRACK LISTING:
Legum Servi Sumus Ut Liberi Esse Possimus (Intro)
Cause And Effect
Return To Form
As Above – So Below
Screaming
Should We Cross Paths
Contempt
Thistles
My Love
Enlightened