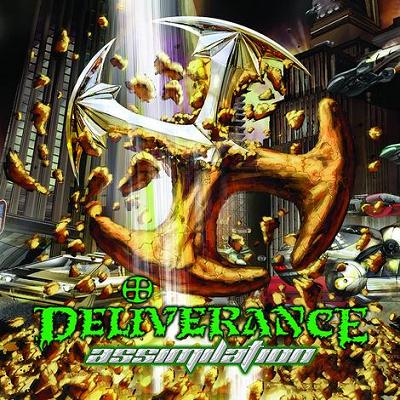 “Assimilation is dangerous. You can lose control. You can lose your very identity. You can lose your personal autonomy. Assimilation is very dangerous. Beware. However, before you read any further we must inform you that resistance is futile. Deliverance demands….you WILL be Assimilated! Fortunately, the 2001 Deliverance album Assimilation ensures that you will be raptured into a creative foundation of edgy heavy metal guitar baptized in a backdrop of subtle digital tones to create a work that can best be described as dark and heavy – almost goth-like in feel – meeting the needs of both the headbanger and the soul. Music critic Angelic Warlord called Assimilation “the most musically consistent effort from the band since its critically acclaimed 1993 work Learn.” Tracks such as The Circle and Save Me From will pull you in with their technical prowess while Assimilation and Between 2 Worlds give rise to a resounding heaviness. The Limitless Light and Impressions, on the other hand, bring chorus hooks of a gripping capacity. Assimilation finds founding member Jimmy P. Brown II in top form with his doom-like and low key David Bowie meets Geoff Tate (Queensryche) lead vocal abilities. As a rhythm guitarist, he adorns the full length of the project with his mega-tight riffs and chops, placed right up front in the mix where they belong. Longtime Deliverance bassist Manny Morales makes his presence felt as well in furnishing an abundance of unwavering bass lines. Keyboardist David Gilbreath, of course, adds the industrial element to the band’s sound, his accentuating but not overriding work bringing out the best in the quality material here. Out of Deliverance’s epic catalog of transformational albums, Assimilation is one of the top favorites at Retroactive Records! As we said… resistance is futile. You will be Assimilated! For fans of Queensryche, Deliverance and Rammstein.” -Retroactive Records

TRACK LISTING:
The Limitless Light
From The Beginning
Assimilation
The Circle
Sell Your Soul
The Search
The Learned Man
Between 2 Worlds
Impressions
Save Me From