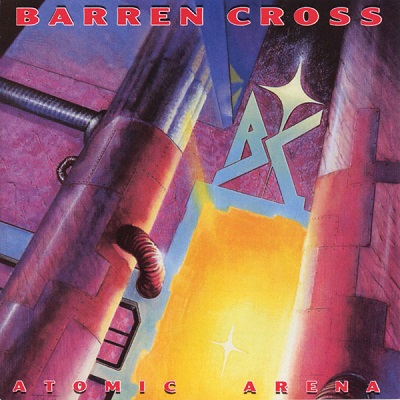 “By the time 1988s Atomic Arena was released, fans had already been whipped into a feeding frenzy with the song Deadlock being included on the massively popular California Metal Compilation. The song demonstrated a significant leap forward from anything the band had ever done. Fans were demanding more and it’s hard to believe Barren Cross could have delivered a more perfect album than Atomic Arena. Most noticeably, the songwriting had matured with topics including abortion, suicide, cults and substance abuse – all presented in a skilled manner. Now signed to Enigma Records, the band was label-mates with Ratt, Slayer, Poison and Stryper and MTV’s embrace of the album’s opener Imaginary Music showed that’s exactly where they belonged. Mike Lee’s charismatic Dickinson-influenced lead vocal style was perfect for an album that featured dominating fast-fingered shredding guitar work, resounding monster bass lines and drums that pummeled the heart and soul of the most dedicated heavy metal fan. Yes, Atomic Arena was special and that’s why the album was voted #11 on Heaven’s Metal Magazine’s Top 100 Christian Metal Albums Of All-Time. The 2020 re-issue has been remastered to perfection and comes with deluxe packaging. This is the ultimate reissue for one of Christian metal’s ultimate albums.” -Retroactive Records

Limited Edition of 1000 units and including a 16-page booklet with rare band photos and all the lyrics.

TRACK LISTING:
Imaginary Music
Killers Of The Unborn
In The Eye Of The Fire
Terrorist Child
Close To The Edge
Dead Lock
Cultic Regimes
Heaven Or Nothing
King Of Kings
Living Dead