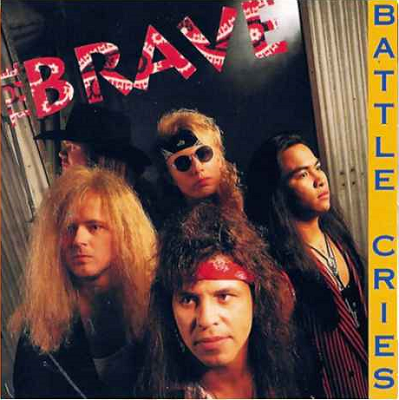 “John and Dino Elefante’s label Pakaderm released some of the greatest AOR melodic rockers, such as Mastedon, Guardian, Fear Not, Halo, X-Sinner, Lovewar and, of course, this release by THE BRAVE. John and Dino were the Mutt Lang of Christian music – it seemed like every time you flipped over a CD their name was stamped as the producers and there is a good reason for it. They were experts at their craft. John was the lead singer of Kansas. He and his brother even produced the St. Elmo’s Fire soundtrack. Their production was over-the-top and blew everything out of the water. What they did for THE BRAVE was no exception. This band would have been huge had it come out a few years earlier (grunge was quickly closing in). It is ultimate ear-candy, with flying guitar works, melodies, hooks and explosive production that was second to none. It was the perfect example of what happens when you have pros in your corner, pushing for excellence. It’s better than you remember – trust me – it’s that good. It can still stand up to any mainstream act today. Strong vocals, attitude and more.” -Girder Music

Limited to 200 copies on red, white and black splatter vinyl.

TRACK LISTING:
Side A
All Together Now
The Waiting
If That Ain’t Love
Running All My Life
Tears Of A Broken Heart