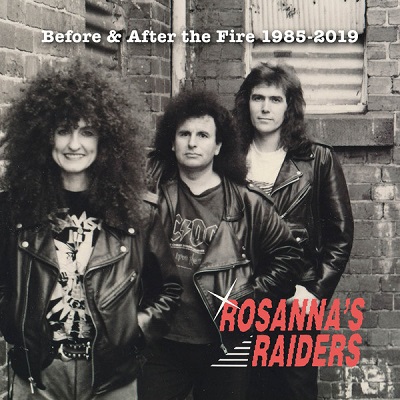 “Collection of selected studio recordings made from 1996 until 2019 that encapsulate what would be Rosanna’s Raiders third album after a long hiatus. Some of these songs were released previously on Rosanna Palmer’s solo albums, self-released in Australia for the Christian music market, so a careful pick’n’mix selection was made for all the Rosanna’s Raiders fans out there who never heard these amazing songs. The 2019 song ‘I’m Rising” is an exclusive (outside Australia) for this release. Recorded at the time this project was settled, it’s one of their heaviest tracks ever recorded, much in the style of “We are Raiders”! Speaking of “We are Raiders”, that rare 1985 cassette never released on vinyl and only presented as a bonus CD on a US re-issue from 2007 of both their albums, it will be presented on this release too as a bonus second disc, so it will be the first time it is released in Europe. Rosanna’s Raiders were a female fronted hard rock power trio formed in the early 80s in Australia similar to Christian rock bands like Petra, Resurrection Band or even comparable to Christian female fronted melodic metal/hard rock bands Ransom and Arsenal. After two domestic cassette releases in 1985 and 1986, they have their first international release “Calling Down Fire” released in 1988 by the Christian metal/rock label Pure Metal. Basically, the songs were the same ones from the “Run The Race” cassette released two years earlier in Australia. In 1989 they have their second album “Clothed In Fire” released. In the 90’s, Rosanna, David and Johno, along with other musicians, have continued to record sporadically under the name of Rosanna Palmer. Listening to the new song “I’m Rising”, Rosanna’s voice still keeps it’s power from the past; in fact, we can consider Rosanna Palmer the best female Christian hard rock singer and the music style continues to be the melodic hard rock/heavy metal that you’ve heard on the 80’s albums. Presented with a 16-page booklet containing lyrics, rare photos, liner notes from David Palmer and remastered sound.” -ProgAOR

TRACK LISTING:
Disc 1
I’m Rising
Sinking Sand
Keep On Dreaming
I Will Love You
Changed Life
I Met A Man
To Have It All
Lonely Child
Where Does My Hope Come From
A Little Bit Of Love
Stolen Innocense
More To You
Risen
Let Your Voice Be Heard
So Many Voices

Disc 2
We Are Raiders/Reflections
When You Woke Up This Morning
Spotlight
Masks
You Are My Rock
Why Don’t People Care
Hiding Behind Closed Doors
Whose Side Are You On
Mr. Magic
He Is Coming (Are You Ready)