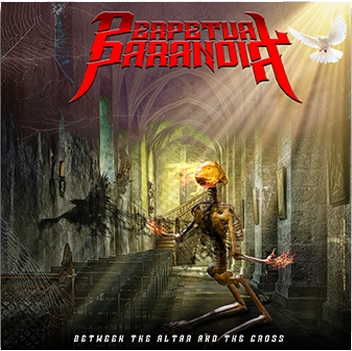 Between The Altar And The Cross

“Tiago James de Souza was first known as guitarist for the bay area thrash band Hand Of Fire. Dale Thompson was first known as the vocalist for Christian hard rock legends Bride. They have teamed up for their second album of heavy metal enchantment. We say “enchantment” because this slab-o-metal is more dangerous and packed full of more pure magic than an enchanted forest. Trust us – this one is a maturation of the brilliance of the band’s debut, The Reaper. Let’s talk about the guitars on this album. They are instantly recognizable as Tiago is a jazz musician with an electric magic wand in his hands – far more than predictable, by-the-numbers heavy metal. Expect occasional soft intros that lead into heavy, driving riffs, along with odd chord progressions and key changes that keep the listener entranced on what’s coming next. There are multiple completely memorable solos on this album that take excellent songs to even higher levels. Tiago’s guitar work is second to none. As if the album could not get better, Between The Altar And The Cross also features guest axe-men Juninho Afram (Oficina G3 of Brazil), Paul Jackson (Bloodgood), Oz Fox (Stryper) and Troy Thompson (Bride). You will also hear the talent of guest vocalists JT (Metal Nobre), Les Carlsen (Bloodgood) and Chaz Bond (BioGenesis). The band spared nothing on this album. Dale’s vocals are as aggressive as ever – daring, mesmerizing and leading the listener deeper into the enchanted forest of metal. Be careful – there are fire-breathing dragons in that forest and we promise Between The Altar And The Cross will take you to places you did not know existed. 12 tracks packaged with an 8-page insert and a jewel case.” -Roxx Records

TRACK LISTING:
Trampled Under Feet
Between The Altar And The Cross
Sin Machine
Living With The Gods
Perpetual Paranoia
Though He Slay Me
There Will Be Blood
In Vain
My God My God
Church Of Make Believe
The Rhema
Acapella