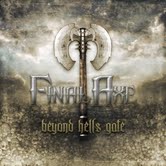 “This heavy metal classic was originally recorded in 1989 but never saw a proper label release until 2005 (limited to just 1000 copies!). The 2010 Collector’s Edition features stunning new artwork, while the music has been remixed, remastered and partially re-recorded. We extend a special thanks to the amazing Robert Sweet (Stryper) for providing real drums on this Collector’s Edition (the original release featured a drum machine). We asked him to ‘really let loose’ and to ‘drum like you’ve always wanted to – with no restrictions’ and that’s exactly what he did! The result is a world-class heavy metal release with drums by a bonafide superstar! In addition, there are three tracks included on the Collector’s Edition that did not appear on the original release – an Intro track and an Outro track (both instrumental), but the real gem is the Robert Sweet drum solo entitled “Area 51”. This is the very first Robert Sweet drum solo (studio recorded) released since the legendary Roxx Regime demo! Final Axe specializes in big, neck bulging, fist extending, righteous riffs. For fans of Judas Priest, Iron Maiden, Armored Saint, Barren Cross and early Bloodgood. Enjoy!” -Retroactive Records

TRACK LISTING:
Beyond The Gate
Baptized In Blood
Are You Ready?
No Time To Die
Soldier Of Compromise
Blind Faith
Area 51
Close To Deliverance
Thrown In The Fire
Don’t Run Away
War Cry
Rated X
Eternity