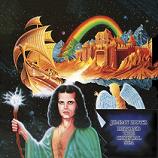 “Jimmy first shared the stage with The Guess Who when he was just 16. In the years that have followed, Hotz has worked as a producer, engineer and musician. Some of the artists that Hotz has worked with, in one capacity or another, include Fleetwood Mac, BB King, Dave Mason, Leon Russell, Yes, Jon Anderson, Kitaro, Steve Winwood, Chicago, Jerry Williams, The Association, ArkAngel, Petra, The Smothers Brothers, Roger McGuinn, Giant Killer, Dove, Vision, Scott Gershin and Haven. Ask any in-the-know collector about the best Christian progressive art rock album and the answer is usually a toss up between ArkAngel’s Warrior and this one. Beyond The Crystal Sea is the heavier and spacier of the two, plastered with what seems like layer upon layer of synthesizers. “March Of The Dead Souls” pins your ears to the wall from the start with its hard space rock barrage and eerie banshee choirs. Hotz’s layered hard rock guitar is absolutely venomous on “Hand Of The Most High” and the instrumental “Teton”, while “Vision Ships”, “Beyond The Blue” and “From Love Life Did Begin” are more reminiscent of the melodic lavish textures of Yes (though vocally Hotz brings to mind Peter Gabriel of early Genesis). ArkAngel’s Kemper Crabb is in here playing recorder on “Alpine Magic”. The production quality is superb as is the fantasy cover art. If you’ve got a good stereo, you’re gonna wanna blast this up loud. It’s out of this world!″ -Born Twice Records

Long out of print, it is now available for the first time ever on CD. It has been digitally remastered for enhanced sonic clarity and includes two all new bonus tracks.

TRACK LISTING:
Observations Of A Larger Reality
Night Passage
The Vision Ship
Teton
Beyond The Blues
Alpine Magic
From Love Life Did Begin

Bonus Tracks
Long, Long Ago
The Gates Of Time