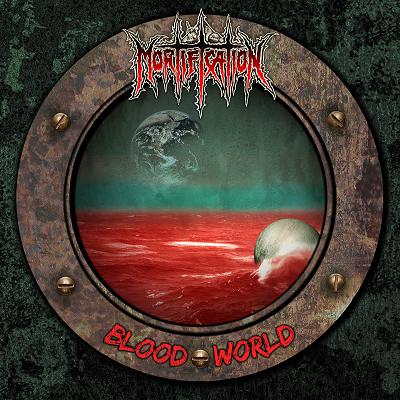 Soundmass are happy to announce their CD re-issue of Mortification’s 1994 album Blood World.

The band’s 4th studio album sees them with a new drummer, a new producer and a new sound – unabashedly thrash metal, but with groove and classic metal influences. It was at this point that Mort followers realised that the band would constantly evolve and experiment, never repeating themselves. According to Australian Music Online: “The strange combination of extreme styles began setting Mortification apart from the crowd of same sounding bands and widened the band’s audience as they became quickly recognised as innovators and not imitators.” In fact, despite the popularity of their early classics like Scrolls Of The Megilloth and Post Momentary Affliction, it was actually Blood World that went on to be the best selling album from Mortification’s entire catalogue. It is a solid slab of thrash full of great songs, some of which became Mort classics.

Remastered and with the original cover art re-created from scratch by Tobias Jäpel, this 2020 jewel case version of Blood World includes 4 bonus tracks and an all-new layout – a 12-page booklet with alternate cover art, lyrics, photos and an album history written by Scott Waters (Ultimatum/NoLifeTilMetal). This edition is a must for fans of this pioneering Aussie band and any true thrash devotee.