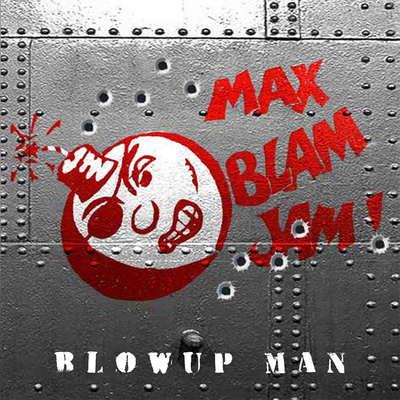 “Roxx Records is very excited to be bringing you a very limited edition one-time CD pressing of a long lost rock ‘n roll gem of an album from MAX BLAM JAM, featuring Glenn Rogers and Brian Khairullah of Deliverance fame. This is not your typical Christian metal album, though – it is a very diverse rock ‘n roll album that has never been officially and fully released… until now. Check out this original press promo the band used back in 1991 when this album was first recorded: ‘In March of 1991, Brian Khairullah, dissatisfied with his relationship with his record company, left the band Deliverance in pursuit of artistic freedom. At the same time Glenn Rogers was writing music on the side while he was playing lead guitar for Steel Vengeance (Black Dragon Records of France). Brian and Glenn came together at that time and found the collaboration to be fiercely productive. They sought to create music that could be felt in the heart as well as the gut. What they created was a crunchy funky blues groove with an affinity for the soul. They then enlisted former Steel Vengeance bassist Cesar Ceregatti and multi-instrumentalist Dan Ceregatti for drums and keyboards. Cesar’s aggressive funk groove combined with Dan’s diversity and willingness to experiment provided a rich addition to MAX BLAM JAM. MAX BLAM JAM’s musical influences are eclectic, ranging from Elton John, Primus and Aerosmith, to the Beatles, Jimi Hendrix, Metallica and Mozart. This mixture and the energy generated on stage make MAX BLAM JAM a new answer to the question… Are You Experienced?’ This is a very special pressing of this long-lost classic Christian rock record originally recorded in 1991. It features all new artwork and layout courtesy of Scott Waters of No Life Til Metal and all ten original tracks fully remastered by Rob Colwell of Bombworks Sound, beautifully packaged in a jewel case with 8-page booklet and all lyrics enclosed.” -Roxx Records