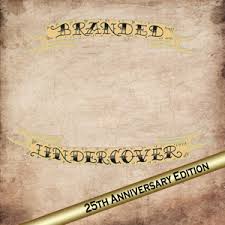 “Few records contain the level of emotional resonance or impact that Undercover’s ‘Branded’ did. After the entrance of new vocalist Sim Wilson, the band stepped up their game several notches. Having already begun to shed the earlier pop-punk sounds of their first two albums, the band’s fourth studio release showed immense growth and maturity as they shifted toward a layered rock sound, incorporating hard rock, new wave, heavier punk rock and even gentle pop flourishes. The lyrics became more mature as well, touching on subjects like depression, battling temptation, rejection of God and even a song about the crucifixion of Christ from the perspective of Pontius Pilate. All in all, perhaps one of the greatest rock albums of the 1980’s.”
-Intense Millennium Records

TRACK LISTING:
I’m Just A Man
The Fight For Love
Where Can I Go?
Tears In Your Eyes
Pilate
Build A Castle
Cry Myself To Sleep
Prelude
Darkest Hour
Interlude
Come Away With Me
If I Had A Dream