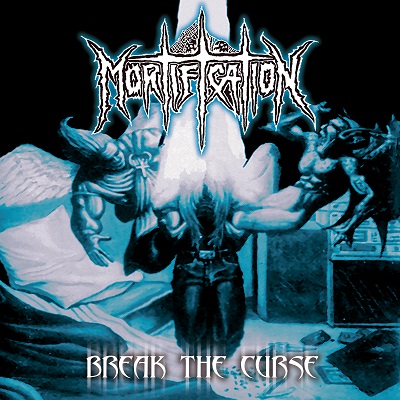 1990 – the year the legend begins – the year Lightforce changes their name to Mortification and begin to make an indelible mark on Christian metal history. The future would see them as leaders, not followers, especially in the extreme metal scene, and they would go on to release 16 studio albums and multiple live albums. 1990’s “Break The Curse” was where all these release began… kinda. “Break The Curse” was originally released independently as a 6 song Lightforce demo cassette – it wasn’t until 1994 that Nuclear Blast released this title under the Mortification moniker with other tracks from the original recording sessions. Musically, “Break The Curse” blends elements of thrash and death metal – a massive change from the heavy/power metal of Lightforce – which led to their early slogan “Total thrashing death”. Think early Kreator, Destruction, Sodom. It’s raw, but the production is above par compared to most other demos from the era. We are also introduced to Steve Rowe’s guttural vocals for the first time, which were a perfect match to the ferocious music. This demo got Lightforce signed to Intense Records, they changed their name to Mortification and Christian death metal soon came to life!

With previous versions all sold out, Soundmass are pleased to be re-issuing “Break The Curse” in 2022. As a tribute to its first incarnation, we have created a modification of the original Lightforce demo cover to grace the front of this CD. Courtesy of Scott Waters (Ultimatum/NoLifeTilMetal), you also get a brand new layout in a 12-page booklet with lyrics and photos. The audio has also been meticulously remastered by Paul D. Clifford (PCP Studios) for a superior listening experience. And if that wasn’t enough, we have made this a 2-CD edition with the 2nd disc – “Live 1990” – being the audio from their first ever concert as Mortification. It’s raw, but it’s a serious slab of history. Not only do you get a bunch of classic early songs, but there’s also a few mortified versions of Lightforce tracks. Do you need any more reasons to get this double CD? It’s history in the making!