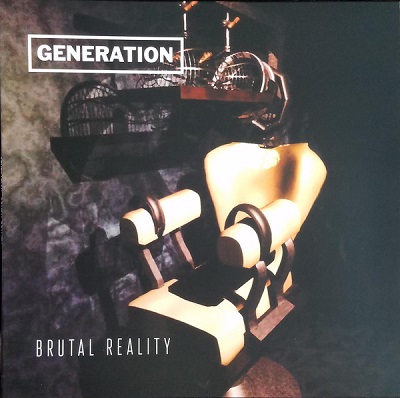 “1993 was a critical year of transition and change for the music world. Mariah Carey and multiple boy bands replaced melodic rock and metal bands at the top of the radio charts. And instead of blockbuster albums by established 80’s rockers, we were stuck with grunge/alternative taking over and giving us bands like Gin Blossoms, Spin Doctors and Soul Asylum. Hard music fans needed help and they needed it fast! No one could have anticipated how much Generation’s Brutal Reality would strike a chord in the hearts of a generation of metal fans feeling alone, ignored and left behind. It was modern. It was metal. It was abrasive and it seemed like something that would come off a futuristic Blade Runner movie soundtrack! Brutal Reality was birthed into existence in 1993 on Wonderland and Metal Blade Records. Fans were rendered speechless with a full album of pioneering and cutting-edge heavy, technical industrial metal of the highest order featuring the talents of Randy Kerkman (Mission Of Mercy) and Bruce Franklin (of the epic, historic metal doomsters TROUBLE). Elevating Brutal Reality is the uplifting and thought-provoking Christian themes in their lyrics, establishing the album as a certified agro-industrial classic recommended for fans of Ministry, NIN, Circle Of Dust and Chatterbox. Fans have been dreaming of the day when this cybernetic masterpiece could be heard on analog vinyl format. Most thought this day would never happen. Think again. Girder Records is offering this industrial metal classic as part of the Limited Run Vinyl series on 180 gram black vinyl. Almost 30 years later, the album sounds and feels as relevant as ever. Grab your copy now. Trust us, resistance is futile.” -Girder Records

Remastered and limited to only 100 copies.

TRACK LISTING:
Side A
Alive
Retro-Vision
Believe In Miracles
I Live In Flesh
Revolutionism
Nothing To Give
RM. 101

Side B
Still You Died
Chemikill
Hunger
Psalm 69