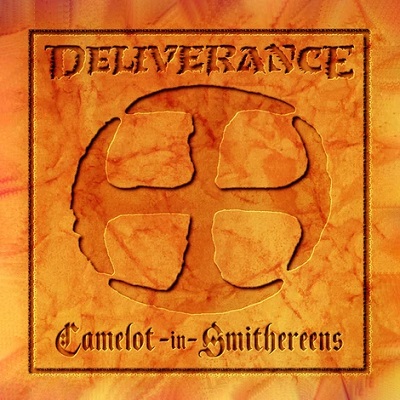 “When Deliverance first came onto the metal scene in the mid-80’s they were full-on speed metal thrashers, but even then it was with an interesting Queensryche stylistic slant as well. The band became popular in both the thrash and prog metal circles because of their cutting edge style. Since that time it has been interesting to watch the band’s evolution to a more experimental, more somber and introspective mixture of progressive gothic metal (Saviour Machine, later Queensryche), classic metal and theatrical art rock (David Bowie), while still retaining definitive thrash elements. The 1995 release was a culmination of those styles more so than any other release by the band. Camelot In Smithereens is a deep, expansive album that reveals itself in layers, with subtlety enough to not lay all the cards on the table upon first listen. It’s the type of album that grows more lovely with each repeated listen and over the years scratches that itch when you need something a bit more cerebral for your heavy metal experience. Highly recommended. Limited to just 200 copies – grab them while you can!” -Retroactive Records

Original 1995 release remastered by Rob Cowell of Bombworks Sound. Comes with a full-colour insert with lyrics and band pics.

TRACK LISTING:
Somber Theme (Where Are You)
Lindsey
Not Too Good 4 Me
Anymore
Book Ends
Beauty And The Beast
Make My Bed In Hell
The Red Roof
In-U