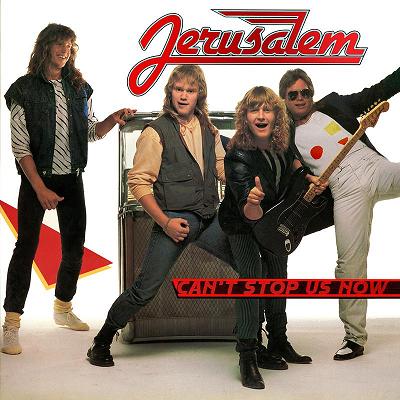 “In 1983 Jerusalem released their fourth album Can’t Stop Us Now. With an increased focus on melody, the band embraced more of an 80’s pop metal sound in the vein of Kiss, Van Halen and The Scorpions. The thunderous, infectious arena rock sounds of CSUN showcased the band’s creativity and dedication to offer fans relevant music that would capture both their hearts and souls! While Jerusalem had created powerful anthems and epic rockers in the past, CSUN magically mixed the ingredients just right. The title track is an endorphin rush of fast-riffing guitars and electrified, authentic vocals. It was the perfect release for 1983. Jerusalem proved once again they were masters at their craft. Yet, Can’t Stop Us Now never got a proper CD re-issue in English until now. With several compilations having songs from the album, this 2018 Retroactive Records re-issue is the first time the album has been made available on CD in English featuring all the original songs! This Rob Colwell (Bombworks Sound) Legends Remastered version adds warmth, depth and sonic clarity to perfection. Retroactive Records has packaged this gem in a jewel case with a 12-page insert featuring band pics and lyrics. Great pains were made to make sure this classic was given the full re-issue treatment by including two bonus tracks – “Time” from the Front Row compilation and “Heartbeat (Light Remix)” from the Tretti compilation. Jerusalem fans have waited decades for a proper CD re-issue and now you have it! For fans of Kiss, Van Halen, Daniel Band, Resurrection Band and The Scorpions.″ -Retroactive Records