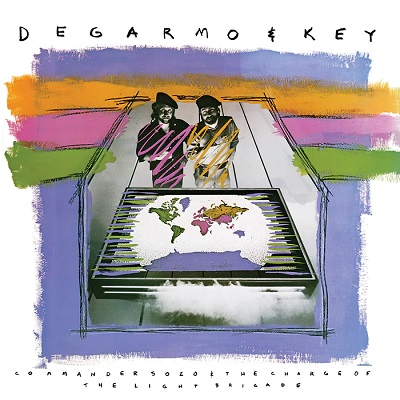 Commander Sozo And The Charge Of The Light Brigade (re-issue)

“COMMANDER SOZO AND THE CHARGE OF THE LIGHT BRIGADE was released in 1985 with one of the longest titles in Christian rock history but was also accompanied with one of the longest tenures an album has sat on Christian charts. Songs “Destined To Win” and “Casual Christian” (both on this release) were the top two most requested songs from the band. “Destined To Win” was a duo with the great Jesse Dixon and made its way into the ears of every Christian radio station listener, not to mention onto every D&K best of album made. By the time this album came out in the mid ’80s they had developed a throbbing, edgier sound embracing a specific style of synth-driven new wave which had been popular in the early ’80s. This works particularly well on opening cuts “Active” and “Competition” which romp along nicely without succumbing to the band’s other American bombastic rock of the era. It’s all throbbing synths, clunky ’80s drums and Dana Key’s edgy guitars but it has its own charm. There are lighter moments of course and the band’s usual spiritual concerns are aired so you get apathy tackled on “Charge Of The Light Brigade” and “No More Goodbyes” reminds believers about the realities of Heaven. The return of Jesus is celebrated in phased, spaced out fashion on “Jesus Is Coming”. But the absolute standout track here is “Destined To Win” where the band team up with gospel artist Jessy Dixon for a rousing inspirational moment wrapped around an immense hooky chorus. Worth hearing the album just for that song!” -Girder Records