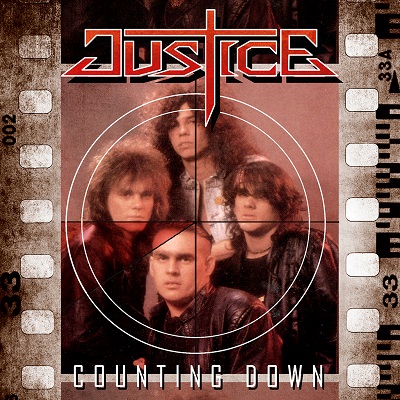 Australian hard rock/metal band JUSTICE recorded their one-and-only album Counting Down in 1990. It was picked up and released by Round Records and received international distribution. The band went on to demo a few more songs, including “Proven Infallible” from Godspeed Australian Metal Compilation (Rowe Productions, 1994), before calling it a day.

Counting Down is full of 80’s hair/pop metal inspired songs. It serves up 10 songs of everything you would expect from the genre – catchy choruses, fantastic songwriting and talented playing. This 30th Anniversary Edition of Counting Down has been remastered by Rob Colwell at Bombworks Sound. The results are remarkable, breathing new life into the recording and giving the album a crisper, fresh sound. Recommended for fans of Stryper, Ratt, Bloodgood, Dokken and Zion.

As if that wasn’t enough, this 2020 Soundmass re-issue also includes an entire 2nd album as bonus tracks. Not JUSTICE, though, so let us explain… After a stint in the UK with Escape Music signed band Eruption, Justice frontman Darren returned to Australia and began a new project in 2011 – to record a backlog of songs under the name DAZ OF OZ. To do so, he called upon the services of, amongst others, former Justice members Marty and Shane, making it a reunion of sorts. The results were an honest and organic sounding album titled “1”. The 11 songs are varied in style, but what you get is hard rock with heart and soul. Recommended for fans of Motley Crue, Van Halen, Bride, Lynch Mob, King’s X, Kiss, Tyketto and Harem Scarem.

TRACK LISTING:
Disciple
Race For Victory
Way Back Home
Givin’ It All
Jesus Is The Rock
Counting Down
Blood Of His Son
There’s A Better Way
Stand Up
Grace Of God

Bonus Tracks:
DAZ OF OZ: 1
Believe
Let You Know
Shine
Tappin’ The Feet
Love Her All I Can
Nobody
Gonna Be Alright
Lies
Overview
Proven Infallible
Reflection