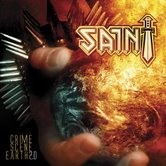 “Saint is one of a handful of pioneering Christian heavy metal bands that re-grouped after being inactive for some years. After dominating Christian metal in the 80’s, they reformed in 1999 and self-released albums in 2004 2.06 and then Crime Scene Earth in 2008. The band signed with Retroactive Records in 2009 and agreed to have the label re-release this 2008 classic. However, this new Retroactive Records version has been re-titled Crime Scene Earth 2.0 as the album has had many parts completely re-recorded as well as being remixed and remastered. CSE 2.0 also features stunning, all-new artwork by extraordinary artist Rex Zachary, which is far superior to the original release. On the original release the classic voice of Saint, the immortal golden-throated Josh Kramer, sang on only three tracks. On this re-release the band had Josh go back and record his Rob Halford-ish vocals on every single track on the album! From the thunderous ‘Bended Knee’ to the stunning cover of the Judas Priest classic ‘Invader’, Josh and Saint ascend to the elite levels of melodic heavy metal! This heavy metal classic has never sounded better!”
-Retroactive Records

For fans of Judas Priest, Iron Maiden and Barren Cross.

TRACK LISTING:
The Conquest
Half A Time’s Measure
Terror In The Sky
Everlasting God
Crime Scene Earth
The Judas In Me
Too Many
Invader
Bended Knee
Lost