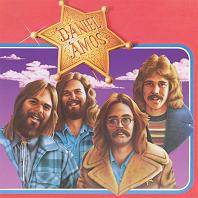 “1976 saw the release of the now classic self-titled debut album on Maranatha! Records. While a number of early Jesus Music bands were trying to emulate the country rock sounds of The Eagles, none did it as masterfully as Daniel Amos. In fact, they were so successful that in 2002 The Encyclopedia of CCM would go on to say, “Song for song, and as a total package, Daniel Amos stands up to any of the albums The Eagles made prior to Hotel California.” This 2011 Born Twice Records release 35th Anniversary Edition is a deluxe 2 CD remastered re-issue of DA’s first self-titled album plus new liner notes, rare photos and never-before-heard recordings from the DA archives. In addition to all of the songs from the first album, this collection includes newly recorded ‘Audio Liner Notes’ with Terry Taylor about the history of the songs and the band 2. bonus tracks including previously unreleased demo and live recordings from the years leading up to DA’s record contract with Maranatha! Records and the first songs recorded for the label, including ‘Ain’t Gonna Fight It.’ -Born Twice Records