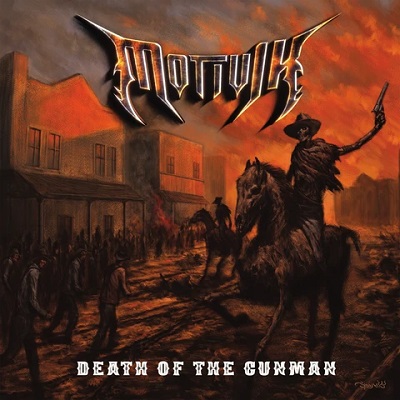 Death Of The Gunman

“Roxx Records is excited to announce our last full release for 2020: the brand new release from Atlanta’s very own Motivik. How do you say Motivik? MOE-TEE-VICK What does Motivik mean? Motivik is derived from the word motive. And what is the motive of Motivik? To rock you hard with a message of hope and encouragement for a lost generation. Motivik features Ryan Roebuck handling the music and vocals and Courtney Simmons on vocals. That’s right – dual vocalists, modeled in a way much like Gary Lenaire and Guy Ritter from Tourniquet, except they pretty evenly share the vocal duties. If you ask Motivik what there sound is like or what their style is they would say they are ‘Melodic groove thrash’. A little more on the thrashy side if you ask us, especially when you listen to the band’s cover of Sacrament ‘Souls In Torment’, featuring a guest appearance from Sacrament’s very own Robert Wolfe. We are happy to be bringing you the band’s debut full-length effort entitled “Death Of The Gunman”… If you love thrash, groove, doom and rock all spun together and cooked up with catchy hooks be sure to pick up a copy!” -Roxx Records

TRACK LISTING:
Inception
Away
Lament
The Past Of Tomorrow
Souls In Torment
Undismembered
On The Way Down
Pale Rider
Let It Be Known