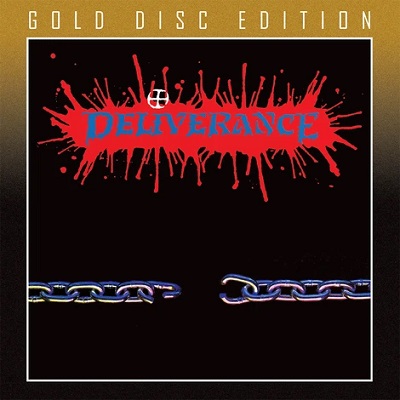 “Frightening, awe-inspiring and absolutely relentless, Deliverance’s self-titled album dropped onto the scene in 1989 with all the finesse of a metallic sledgehammer across the forehead. In 1987, Deliverance had made their presence known in dramatic fashion on the California Metal compilation (a sampler in the vein of Metal Blade’s Metal Massacre compilations) with “Attack” being the very first thrash/speed metal song with a strong Christian message to ever be released. Overwhelmed with anticipation, fans lined up for two years trying to buy more of this West Coast speed metal as phenomenal as anything released by Exodus, Death Angel, Metallica and Anthrax. The long wait ended with the release of 1989’s self-titled debut and fans were not disappointed. Having enlisted the production skills of famed mainstream metal producer Bill Metoyer (Flotsam And Jetsam, Trouble, Fates Warning, DRI, Slayer), the debut exuded all the pure destructive power for which fans could have hoped. Every note is executed with jaw-dropping levels of scientific precision. Jimmy’s vocals are both powerful and soaring. The 2020 Retroactive re-issue is a brand new Gold Disc remaster (Rob Colwell of Bombworks Sound) and includes three non-album demo songs as bonus tracks. The booklet features 2017 write-ups from band leader Jimmy Brown, guitarist Glenn Rogers, bassist Brian Khairullah and Pastor Bob Beeman. This is pure metallic brilliance packaged with a genius 12-page booklet laid out by NoLifeTilMetal’s Scott Waters. Previous CD re-issues of this classic album all had audio or graphics issues. This is the ultimate re-issue of one of a handful of Christian metal’s ultimate albums.” -Retroactive Records

TRACK LISTING:
Victory
No Time
Deliverance
If You Will
The Call
No Love
Blood Of The Covenant
Jehovah Jireh
Temporary Insanity
Awake