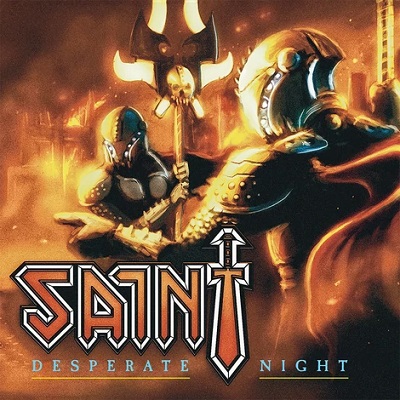 “Originally released in 2012, this is the first time ever to see this classic packaged in a jewel case. Featuring classic Saint vocalist Josh Kramer on vocals on 8 tracks, Richard Lynch on 2 tracks and Broad Is The Gate (2014) vocalist Brian Phyll Miller on 1 track. ﻿Josh and the gang just keep bringing it. The drums are faster than ever, the bass is amazing, Josh Kramer never fails to impress with his song writing ability and blood curdling screams! Desperate Night is right on par with Crime Scene Earth, Hell Blade and The Mark. The sound is fat, full and round. It’s hard to describe Saint if you’ve never listened to them but I would compare them in some ways with Judas Priest. Or imagine Stryper on steroids! Saint is a candle in the darkness, they are unbelievably hard and not ashamed of it. At times it’s as if they are actually battling the antichrist right there on the track through their insane guitar riffs, double bass beats and powerful screams! We present a must-have CD re-issue – remastered by Rob Colwell of Bombworks Sound and the expanded booklet serious collectors crave. For fans of Judas Priest, Dokken and Messiah Prophet!” -Retroactive Records

TRACK LISTING:
The Crucible
Crucified
The Key
End Of The World
Let It Rock
In The Fray
Inside Out
Desperate Night
Zombie Shuffle
Judgment
To Live Forever
Escape From The Fire
The Crucible (Reprise)