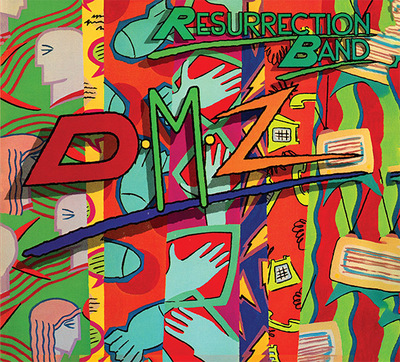 “Originally released in 1982 on Light Records, D.M.Z. offers some of Resurrection Band’s most powerful musical testaments. “Military Man” is a blistering opening track sung by Glenn about the loss of a soldier’s humanity in the struggle to survive. “White Noise” features Wendy’s all-time best raw vocal on a song about the rhetoric of a culture that prioritizes stockpiling arms over feeding children. It begins with a 90 second feedback-drenched guitar solo by Stu Heiss that is Resurrection Band’s answer to Van Halen’s “Eruption” and is generally considered to constitute the single greatest non-Phil Keaggy guitar moment in Christian rock. “Area 312” is another classic, which is a teenager’s lament about the loneliness of the inner city. This 2017 4-panel digipak re-issue is limited to 500 copies and features the same remaster that was used on the 2005 Retroactive Records jewel case re-issue. This re-issued used the original 1982 vinyl record gatefold release to reproduce the artwork and celebrates this album’s 35 year impact on lives for Jesus!” -Retroactive Records

TRACK LISTING:
Military Man
Reluctance
Babylon
I Need Your Love
Area 312
No Alibi
White Noise
Lonely Hearts
The Prisoner
So In Love With You