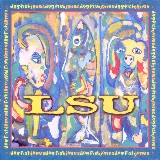 “Originally released on Light Records in 1998, Dogfish Jones is the result of musical genius and cult legend Michael Knott. Enlisting the help of such notables as Chuck Cummings and Gene Eugene, Knott’s last LSU release continues to push the boundaries of creativity in alternative rock. With Dogfish Jones, Knott creates a masterpiece by taking the dark, psychadelic, post punk feel of David Bowie and meshing it with the aggressiveness of Jane’s Addiction. It was an album ahead of its time in 1998. Hopefully, this many years later, this classic heavy album can be appreciated for it’s musical brilliance.″ -Retroactive Records

Digitally remastered and limited to 1000 units, the enhanced artwork contains liner notes about the band’s history. LSU’s Michael Knott is the brainchild of other bands such as Aunt Bettys, Cush and Strung Gurus and is recommended for fans of thr New York Dolls, Sex Pistols, The Choir and Undercover.