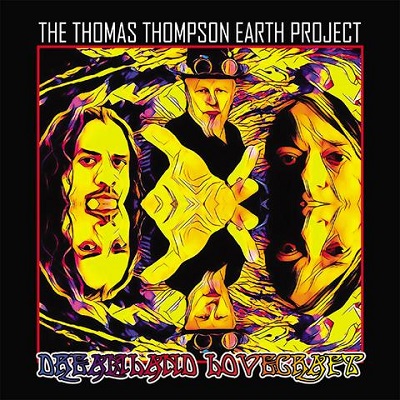 “Roxx Records is excited to bring you another excellent project featuring the talents of none other than the very busy frontman Dale Thompson (Bride, No Other God, Perpetual Paranoia, etc.), along with another very busy guitar slinger Tiago James de Souza (Hand Of Fire, Perpetual Paranoia). Rounding out this project is founder Garret Thomas to complete this amazing new project. At age 12 Garret started to learn to play the guitar. Then when he turned 14 he played bass in his brother’s band called Fatal Delay. They opened up for bands such as P.O.D., Living Sacrifice, DC Talk, Crimson Thorn and many others. Not long afterwards, Garret taught himself how to play drums. After he learned how to play keyboards/synth, then he began to produce and mix his own music. Dale is best known for his work in Bride and in his early career toured the world as frontman and main lyric writer. His career has spanned 4 decades. Tiago from Brazil became a virtuosso on the guitar and moved to the United States where he jumped right into writing and recording with various bands. The original idea sprung from Garret sending some music to Dale who added melodies and lyrics. From there the two teamed up and began writing for a full-blown album. Dale was already working with guitarist Tiago on Perpetual Paranoia. The three of them combined their efforts on this extraordinary side-project to create a very experimental rock album. The song writing took many creative twists and became heavier than the original techno rock sound from where it was originally birthed. The album quickly was titled Dreamland Lovecraft after the imaginative imagery and haunting themes. The Christian-based lyrics are forthright and upfront, sharing gospel themes along with social and personal stories intermingled into one huge abstract picture. However, in the forefront of this collage of poetry and audio menagerie is the theme of Jesus and his power to save. This CD is a very limited pressing of only 300 copies housed in a jewel case and with a beautiful full-color 8-page booklet.” -Roxx Records

TRACK LISTING:
Lift Him Up
Beyond The Means Of The Machine
Down The Devil’s Throat
Oh My Soul
Roll With The punches
There Will Be Blood
Soul Killers
Firestarter
Live To Fight Another Day
Long Dark Winter
Music Is My Supervisor
Eternity And Mercy
All That We’ll Forget