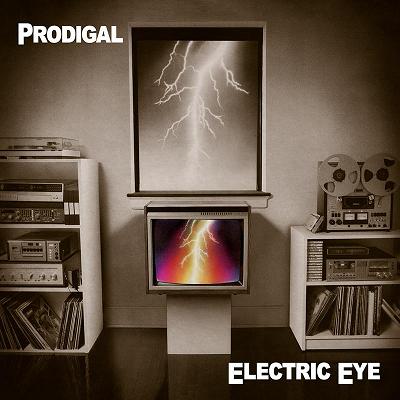 “Never ones to rest on the accomplishments of their epic 1982 self-titled release, Prodigal surpassed ridiculous expectations for their sophomore effort with 1984’s Electric Eye. The album received Best Of The Year honors in 1984 by both Contemporary Christian Music magazine and Campus Life magazine. The album also received national attention for a unique promotional idea: a computer program for a Commodore 64 was mastered into a stop-groove at the end of the vinyl record, the first time this had ever been done. The program, if copied to a cassette tape, could be loaded via cassette drive into a C-64 computer to reveal graphics, lyrics and a message from the band. The video for the song “Boxes” won the very first Gospel Music Association Dove Award for music videos (Best Visual Song). The music video for the song “Fast Forward” was named Video Of The Year. Yeah, Electric Eye was a big deal! With their 2nd album, the band shook the fragile foundations of Christian music. The content on Electric Eye is beautifully portrayed on the album cover. We have surrounded ourselves with so much to entertain us and consume our time that the difference between reality and artificial are not just blurred but rather the artificial begins to be more real. Note how the actual lightning through the window is faded and bland while the same lightning shown on the television set is vibrant and exciting. This is expressed in different ways on the album along with a host of other topics that are both poignant and eternal. “Scene Of The Crime” is the first song on the album and starts with a police siren leading into an aggressive guitar and keyboard driven rock sound akin to Foreigner or Kansas. Lead singer Loyd Boldman’s bombastic baritone is both edgy and clean as needed with nods to Michael Been (The Call) for pure power. Humanity’s guilt is laid to bear within relationships and how we often leave others with wounds that never heal. But the murderous actions are not missed by the judge who sees all as this is pointed out. We can try to run from the pain and suffering we leave in our wake, but cannot escape a righteous judge. Boldman’s vocals at the end of the song place him among one the best unheralded rock voices in Christian music. You believe his words because you believe his passion and authenticity. It was songs like that that set Electric Eye apart in 1984 and why it was ranked #20 on a 2010 list of Greatest Christian Albums Of All Time and #43 on CCM’s 500 Greatest Albums Of All Time. The 2018 Retroactive Records Legends Remastered Series features the album remastered along with a 2nd CD featuring their 30 minute Electric Eye Radio Special plus 4 additional bonus tracks and – break out those Commodore 64s – you even get the code! For fans of Kansas, Yes, Saga, Foreigner, Styx, Supertramp, Mr. Mister and brilliant, life changing rock and roll! Get this essential CD or splurge for all 3 Prodigal CDs (and the Loyd Boldman 1988 solo CD Sleep Without Dreams) while you can!” -Roxx Records