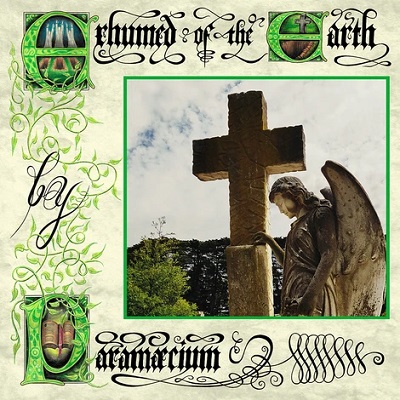 “Bombworks Records is ecstatic to announce in 2020 we are re-issuing one of the finest and most important Christian extreme metal albums ever on both CD (Gold Disc) and double LP multi-color gatefold vinyl! Given a complete remaster by Bombworks Sound’s Rob Colwell, the album sounds better than ever, literally! Exhumed Of The Earth is the debut album by Paramaecium released in 1993. Without any exaggeration, the album is one of the landmarks of both doom metal and Christian metal movements. The band incorporated several classical instrument arrangements on the album, most notably on the 17 minute epic “The Unnatural Conception” where Rosemary Sutton played violin and Judy Hellemons flute. Sutton also did the soprano vocals. The storyline of the album is based on the Bible: it begins at the birth of Christ, continues through his resurrection, speaks of the disciples and ends with Christians coming to life from the dead. Because the biblical references in the lyrics are elegantly written, the album has been often compared to old My Dying Bride. Musically, Exhumed Of The Earth is mostly slow-paced doom metal with death metal influences, most notably on the death growl vocals of Andrew Tompkins and on tracks like “Injudicial.” Exhumed would go on to be voted #42 (just ahead of Horde, Vengeance and Seventh Angel) on Heaven’s Metal Magazine’s Top 100 Christian Metal Albums POf All-Time, with music critic Jonathan “Doc” Swank saying “With its release, the Aussie trio of Andrew Tompkins, Jason De Ron and Jayson Sherlock essentially delivered the most powerful and moving death/doom recording in the history of Christia metal.”” -Bombworks Records

300 unit pressing – first time ever on vinyl! Includes a write-up by Andrew Tompkins. Remastered by Rob Colwell of Bombworks Sound.

TRACK LISTING:
Side A
The Unnatural Conception In Two Parts: The Birth And The Massacre Of The Innocents

Side C
The Voyage Of The Severed
Haemorrhage Of Hatred

Side D
Removed Of The Grave