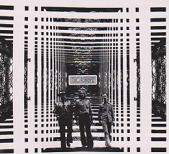 “This is a high-octane power rock trio consisting of Mike Johnson, Fyl Jonnzen and Leon Wilson. Their 1971 custom album absolutely blitzed through eight tunes of heavy blues-influenced material in the vein of Jimi Hendrix and Cream. No muffled sounds here – the production is top-notch and the guitars shine forth loud and mean, heavily imbued with 60s psych effects. Singer/lead guitarist Mike Johnson gives an exceptional performance. He contributed a number of fine solo albums in the 70s, but none of them cook with near the intensity of this baby. ‘Third Eye’ is a good example; after starting with some bizarre psycho-babble, the piece breaks into a fierce minute-and-a-half electric guitar jam. ‘Dry Ground’ is another standout, its fast-driving Hendrix groove outfitted with a killer searing guitar lead. ‘Baby You Lied,’ a love-gone-bad slow blues rocker, sounds like one of those lengthy Derek And The Dominoes tracks, with wild stereo separation that I’m sure made many a hippie smile back then. Dual rhythm guitar and leads give the band a fuller sound than most trios. Wah-wah and fuzz effects abound, sometimes together as on the opening CCR-ish ‘Picture Woman.’ Good solid drum work throughout, too, including a solo opportunity at the beginning of the heavily fuzzed ‘Would You Believe,’ a smooth piece of soft jazz that Mike also included on his Velvet Prince album. This re-issue features great psychedelic cover art to match. The band formed in Chicago in 1968, and their sound spawned out of the city of Chicago’s own particular blend of jazz, blues and rock. On the 2011 Born Twice Records: Legends Remastered Volume Three you can hear this legendary release in digital format, re-mastered by specialist J Powell of Steinhaus. Everything is packaged in a beautiful 6-panel double-gatefold digipak that even includes a band biography that is helpful for new fans! For fans of Jimi Hendrix, Cream and early Resurrection Band!” -Born Twice Records

TRACK LISTING:
Picture Woman
Dry Ground
Baby You Lied
What Happened To Me
Third Eye
You And Me
It’s Been Set Down
Would You Believe