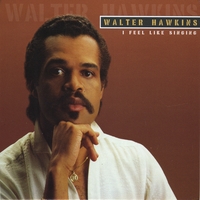 “Contemporary gospel pioneer Walter Hawkins (brother of Edwin Hawkins of “Oh Happy Day” fame) delivered hit after hit with his series of Love Alive choir albums during the 1970’s. The focus was on tight vocals, impeccable arrangements and the astoundingly soulful counter-tenor of Walter himself. By the early 1980’s, Hawkins and his group of tremendously gifted singers and musicians (including wife Tramaine, sister Lynette Hawkins-Stephen and cousin Shirley Miller) had made their mark. ’I Feel Like Singing’, released in 1982 on Light Records, cemented it. Listen to “He’s Everything”, a potent ballad that brings the solo power of Shirley Miller up front. Miller also joins Hawkins on the infectious title cut, trading leads. The tightly woven harmonies of “Hang On In There” make the song a cult classic even today. Tramaine Hawkins is featured on “Coming Home”. Already establishing herself as power ballad singer, her soprano excellence here emphasized her versatility and widened her fan base further. Then there were the duets. The ebullient brassiness of Lynette Hawkins Stephens paired wonderfully with Daryl Coley’s smooth runs on “Do Your Best”. On “Heaven”, Edwin Hawkins enters first and then Walter takes over and blows the proverbial lid off the cut with his high tenor. Remastered and available on CD for the first time ‘I Feel Like Singing’ is a most welcome keepsake and reminder of the glory days of Walter Hawkins.″
-Stan North (Managing Editor, GOSPELflava.com)

This 2013 remastered re-issue of this classic album is the first time this brilliant release has ever been available on CD! It features a 4-panel, full-color digipak, with liner notes written by GOSPELflava editor, Stan North and Gregory Gay! This is a Limited Edition release with only 1000 copies being manufactured!

TRACK LISTING:
I Feel Like Singing
Hang On In There
Do Your Best
Heaven
Coming Home
He’s Everything
Sinner Man
Try What You May
Romans 8:31-32