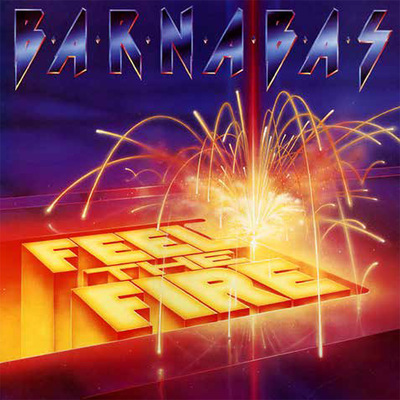 “Barnabas developed a style of music that straddled the fence between energetic, aggressive power metal (like Iron Maiden, Dio or Black Sabbath) and experimental progressive rock (like Rush, Styx or Marillion). On top of the music soared the vocals of a chain-chompin’ banshee lead singer who was all about putting her boot up the dark one’s backside. The overriding question for Feel The Fire was obvious. Considering the artistic and commercial success of 1983’s Approaching Light Speed, could the band capture lightning in a bottle twice? Barnabas was an amazing band, both because they were the heaviest Christian band of their era and also one of the most creative lyrically and musically. They were as musically adventurous as Rush, but they would also put the hammer down at any moment to grind out some extremely heavy metal, which they were doing a couple of years before the likes of Barren Cross, Philadelphia, Saint, Messiah Prophet and Stryper appeared. And while the band proved even more progressive in their metal for this release, the trademark foundations remained intact – smokin’ guitars and top-notch instrumentation. With Feel The Fire, the band expanded the boundaries of Christian metal. Not satisfied with creating art by numbers or being a cookie-cutter band, it would be many years before anyone in Christian metal circles would touch the depth and creativity of Barnabas. With Feel The Fire, fans were treated to a mesmerizing magic slab of metal – one that couldn’t be ignored or shaken, one that was impossibly irresistible and memorable. Indeed, Barnabas was unique in the truest sense.” -Retroactive Records

TRACK LISTING:
Prelude
The Dream
Breathless Wonderment (The Dream Becomes Reality)
Hearts
Feel The Fire
Northern Lights
Follow You Up
Suite For The Souls Of Our Enemies (Part I – Hammer And Sickle)