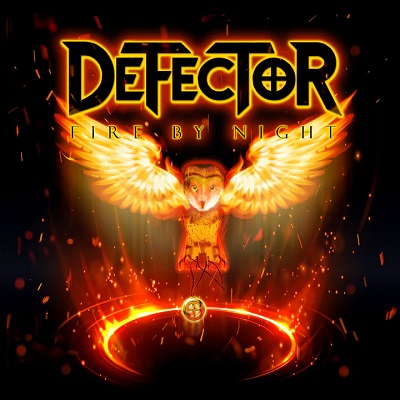 “Roxx Records is proud to bring you a brand new straight-up Christian heavy metal album you have probably never heard before, but you are very familiar with the frontman of this amazing unreleased album! We are happy to be bringing you the new, but old, album from Millennial Reign frontman Dave Harvey’s early heavy metal band, which has now been officially dubbed DEFECTOR. Here is what Dave had to say about this release: “The first Millennial Reign album (2012) was simply a recording project of 80s style songs I used to play in a previous band called ‘3:16’ back around 2000 to 2005 or so. Those songs were never really released back then, so I would completely re-record them all and make a lot of changes to those songs and release as the debut Millennial Reign album. Shortly after releasing ‘Carry The Fire’ on Ulterium, I felt it best to take the project album completely off the market because it really wasn’t Millennial Reign material. I had been considering releasing those original recordings under a different side-project name for people to hear, so after contacting and discussing with Roxx the project took on a whole new life. I hope you enjoy these songs as we bring them to you completely remastered but in their original format as Defector ‘Fire By Night’.” That was what started it all and when Roxx heard those original songs, without hesitation we were stoked to bring you this brand new album for 2023. Ten blistering metal songs that are going to be ringing through your speakers throughout 2023 and beyond!” -Roxx Records

TRACK LISTING:
The Ascension
Always
We Are The Ones
Run For Your Life
Left Alone
Broken
Fire By Night
Live Forever
Everyday
Lost In Vegas