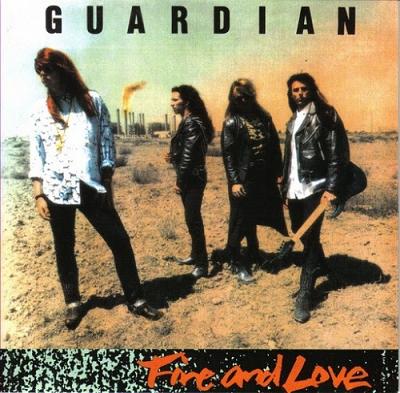 “Fire And Love should come packaged with a rubber mat to prevent your jaw from shattering when it drops to the floor. Response to the album release in 1990 was overwhelming and the video for the song Power Of Love was included in the MTV Headbangers Ball rotation. The shredding melodic metal of their previous album is replaced by red-hot, fired-up commercial hard rock that is belted out with emotive power to spare by the awesome Jamie Rowe. Adding to the album’s appeal is the legendary production talents of John and Dino Elefante (Kansas/Mastedon). If you love big guitars (Palacios rips!), big hooks (Motley Crue would be jealous), big choruses (Bon Jovi would approve), big vocals (can you say wall-of-sound?) and big production (it’s the Elefantes… what else do you need to know?), then you’ll love this album, a true Christian hard rock classic. Fire And Love earned Guardian a well deserved place at the top of the Christian hard rock/hair metal scene, nudging Stryper slightly over to share a bit of the spotlight. At #28 on the Top 100 Christian Metal Albums Of All Time (2010, HM Magazine), #61 on the Top 100 Christian Rock Albums Of All Time (2010, HM Magazine), #18 on the Christian Metal Realm 100 Greatest Christian Metal Albums Of All time and #11 on the Top Albums Of The 90’s by Angelic Warlord Reviews, Fire And Love offers elite Christian metal that still knows how to win the hearts and touch the lives of fans across the world! Fire And Love has been digitally remastered for this 2017 re-issue, further enhancing the pure magic that has been thrilling fans since its release in 1990! The Vinyl was mastered by J Powell at Steinhaus.” -Retroactive Records

TRACK LISTING:
Side A
Power Of Love
Send A Message
Time Stands Still
Forever And A Day
Takin’ On The World