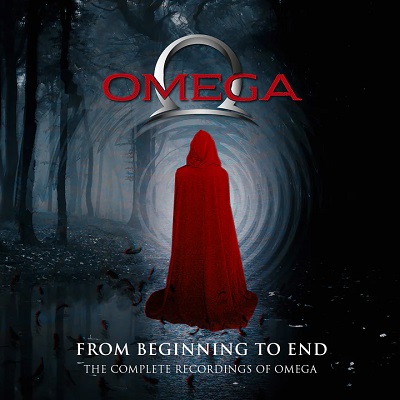 “A fantastic collection of songs from a band that should have been much bigger, but never got the chance! Even though they did not get to the status they deserved, this band made an impact on those they were able to share their message with. This time we go all the way to the UK – Nottingham, England to be exact, as we are set to bring you this 2-CD Limited Edition anthology set. Lets take a look in to the legacy of United Kingdom Christian rockers OMEGA. When the world was still rocking from the sounds of the 70s, the 1980s dawned upon us. Disco was still around and new genres began to arrive – new wave, the new romantics, the emergence of heavy metal and a more melodic sounding heavy rock. Also, the new wave of British heavy metal (NWOBHM) emerged, featuring the bands that we all know and love, but this would also spurn a new generation of Christian metal/rock there in the UK. Still being influenced by the great hard rock of the 70s and 80s, Mark Timson and John Maddison decided that it was time to spread a message of love and hope through Jesus Christ. There were a few bands in the UK, notably the mighty 100% Proof, who really started this ball rolling in the mid 1980’s in the UK. Omega would officially take form in 1983. The band would release two demo tapes of live and rehearsal material. A 10-track tape they made featuring what would become the band’s anthem ‘God Loves To Rock Nn Roll’ and a 6-track live tape. Then in 1985 the band would record and release a cassette-only demo consisting of 3 new tracks entitled ‘The Gambler’. The band would continue gigging all over the UK playing, with a plethora of bands through their short lived 3 year career. In 1985 the band would record what would be their final recording by way of a 7” single (which is impossible to find, by the way) featuring the tracks ‘Love Will Find A Way’ and ‘Give Your Life To Jesus.’ Alas, this would be near the end of the band’s mission. Ultimately, they would play one final show on Saturday June 7th 1986 at an open air concert in Nottingham’s famous Market Square. This show would be recorded on the soundboard solely for the band to enjoy and commemorate their last gig. It has never been heard outside the band’s inner circle. Fast forward to 2022 and Roxx Records would connect with Mark Timson. From this meeting the ball started rolling for what we have dubbed ‘From Beginning To End – The Complete Recordings Of Omega’. We are excited to bring this collection to you in our never-ending quest to catalogue and archive these pieces of musical history. This beautiful 2-CD set encompasses all the recordings the band ever released, albeit all were only released on cassette tape and one 7” single. This package was completely remastered and cultivated by Rob Colwell of Bombworks Sound. We have also put together a beautiful package featuring a brand new cover design and a gorgeous 12-page booklet courtesy of Scott Waters of NLTM Graphics. Packed with photos, lyrics and the story of the band, this is the complete package and limited to only 300 pieces worldwide.” -Roxx Records

TRACK LISTING:
Disc 1
Live Rehearsal (1984)
Light Of The World
Take Me I’m Yours
Searcher
He’s Not Here
Fighter
If We Are One
Don’t Leave Me Hanging On
Protest Song
God Loves To Rock N Roll
Hands High

Gambler (1985 demo)
Gambler
Closer To Heaven
Where Is Hope