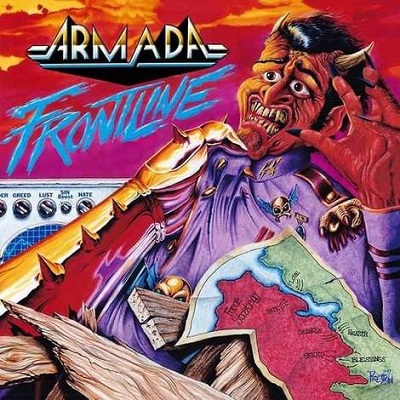 “Armada released this 1987 album as a prolific band out of Michigan. It is remastered by Bombworks Sound/Rob Colwell. The band released three albums from 1986 – 1988 and drummer John Heald was a writer for White Throne Magazine under the name J Emerson. John also recorded with and helped Xalt. Frontline was the album that catapulted the band into iconic Christian AOR/metal status. The album was two parts Barren Cross and one part Twisted Sister. There have been plenty of CD-R copies and bootlegs of this album, but Fontline is being re-issued by Retroactive Records for the very first time as a legitimate re-issue supported by the band. Only three tracks from this classic album were on the 1998 (long out-of-print) CD release called Hope Of Glory. This is the first time this album has ever been available on CD! Get it while you can – limited to just 500 copies. For fans of Barren Cross, Xalt, Dokken, Twisted Sister and Petra! Amazing hooks and ripping guitars!” -Retroactive Records

TRACK LISTING:
Communication
Frontline
The Calling
Pride
Shine The Light
But It’s Only Rock’n’Roll
No Retreat/No Surrender
Lound And Bold
No Alibi
All You Need (Salvation)