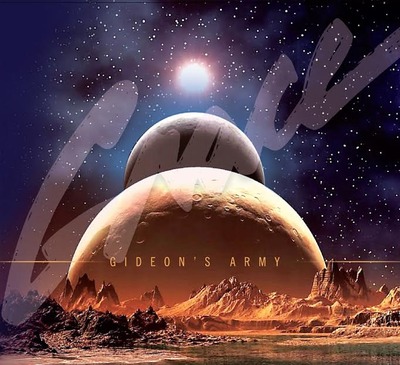 “San Francisco Bay Area based rockers GIDEON’S ARMY were one of the first bands from the CCM movement starting its activities in 1973. Their debut released in 1982, followed by the now cult classic Warriors Of Love released in 1986. The band’s now iconic third album, Grace, released in 1990 on the short-lived Pan Trax Records. This was their first and only album to be released on CD. As with many bands from that era, they embraced the glossy melodic rock sound that dominated the airwaves in the 80’s. Grace rocked hard with plenty of sharp guitar riffs, vintage and modern keyboards (including synths) and elaborate harmony vocals. The band hit all the sweet spots with Grace, with collectors and critics hailing it as an AOR classic rock masterpiece. Original issue CDs rarely show up on auction sites, but when they do collectors regularly pay $200! The 2015 Retroactive Records re-issue is packaged as a four-panel digipak, with greatly enhanced artwork, fully remastered audio and as part of the Legends Remastered Series. This essential AOR album has never looked or sounded better! For fans of Journey, Night Ranger, Petra and .38 Special.” -Retroactive Records

TRACK LISTING:
Knowing You
Lonely Lover
Christina
Grace
Make Up Your Mind
Open Arms
Tough Love
With The One I Love
Turn Up The Heat
Sending You