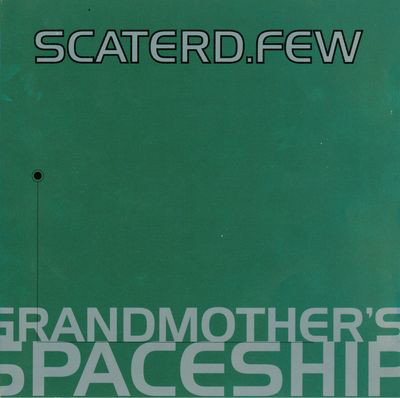 “In 1998 band leader Allan Aguirre reassembled an entirely new cast for Scaterd Few and recorded Grandmother’s Spaceship, which he describes as “hard punk, funk, reggae and futuristic with angst, realism and psychedelia.” He also jokingly referred to the record as Sin Disease 2 and most reviewers believe it to be a worthy successor to that revered masterpiece. The record evinces a very aggressive, predominantly punk sound with a science fiction space alien theme dominating or affecting many of its songs. The theme sometimes seems to serve as a concept for portraying the alienation of believers who live in a world where they are increasingly unwelcome. But in terms of content, the songs come much closer to mainstream Christian music than previous Scaterd Few projects, with fairly obvious religious allusions. The summons to “Wake up, sleeper ” in “Lullaby” echoes Ephesians 5:14, and the cry of “Death, where is your sting?” in “Incorruptible” is from 1 Corinthians 15:55. “Win The Fisher ” is a one-line song whose only lyric comes almost straight from Mark 1:17. The most up-front line in “Arbitrator” (“You’ve knit me, fearfully and wonderfully made”) is from Psalm 139:14. But a number of songs explore darker, scarier stuff. “As The Story Grows V.2” presents voices that berate Christians from a world that has heard it all: “We like the smell of hell/How dare you try to tell us that/He died to set us free”. “Space Junk” records questions that assault the believer (“How can you believe in a god that lets small children suffer?”) and ends with a desperate cry (“Get out of my mind!”) that identifies the assailant, this time, as within. “Bobby’s Song” (from which the album title comes) tells a bizarre story about a grandmother waiting for a flying saucer to take her away, with shades of the infamous Heaven’s Gate cult suicides; the song features the memorable line “When you wish upon a star, you better know whose stars they are”. Remastered to perfection by Rob Colwell of Bombworks Sound, the album finds a very worthy new life on black vinyl and comes with a 12″ insert. Limited to just 200 copies, don’t delay in getting this revered, treasured classic!” -Retroactive Records