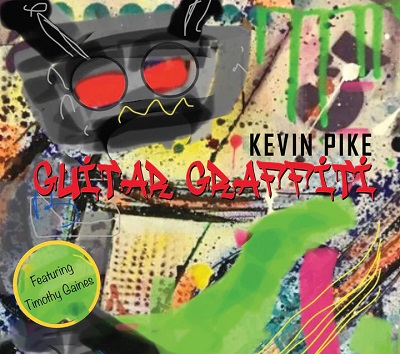 “A killer new instrumental EP from some killer musicians is headed your way! We have two powerhouse players on this one including Kevin Pike of Arsenal out front and the one and only Timothy Gaines (Aldo Nova/Of Gods And Monsters/Stryper) handling all the bass duties. Get ready as we bring to you Guitar Graffiti! Let’s hear directly from the man himself, Kevin Pike of Arsenal, just how he got into guitar and loving the instrumental music scene so much that it would lead us to Guitar Graffiti: “Prior to joining Arsenal, shortly after our Regency Records release Armored Choir, I had just graduated from G.I.T. (Musician’s Institute in Hollywood, California). I was a private student of Bruce Bouillet of Racer X and my love for instrumental guitar kept me practicing for up to 16 hours a day non-stop. Right before Arsenal I was featured in Guitar Magazine for some of my instrumental work, that’s when I originally got the slot for Arsenal. Guitar Graffiti came about after studying and being mentored with Steve Lynch of Autograph. He would encourage me to write again. Through contacts I had made in the Christian rock world, I asked Timothy Gaines if he would play bass. I was really encouraged by his response to the songs. Timothy felt that the material was very strong melodically and technically and that was the push that I needed to complete Guitar Graffiti. Then, once I heard Timothy’s tracks, I knew we had something really special we needed to share with the world. I am so thankful to Roxx Records for helping me share this project and vision. I am very proud of it and excited for everyone to hear it. If you’re a fan of Timothy Gaines, get ready to hear him like you have never heard him before.”” -Roxx Records