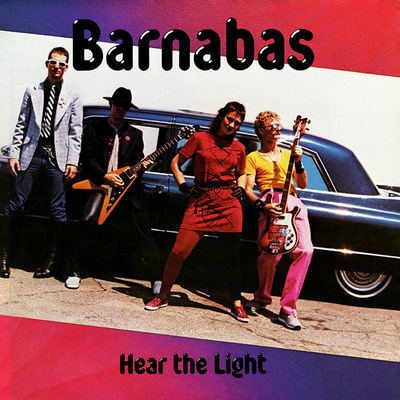 “When Barnabas embarked on their musical journey with the now critically acclaimed debut release Hear The Light (1980), there were few bands doing anything like them in the faith community. There was Resurrection Band in Chicago, Bill Mason Band and Ishmael United in the UK and Andy McCarroll And Moral Support in Ireland. When Hear The Light came out in 1980, it was truly unique punk-esque with a Christian identity. Barnabas, in their early formation, had guitarist Monte Cooley, who could write fast numbers with infectious distortion like no other. What placed Barnabas on top of the rock pile were Nancy Jo Mann’s soaring vocals, backed by a beefy and intricate rhythm section. Songs such as Savior, Directory Assistance, B.C. and Playin’ For Him are reckless and melodic, trademarks of the first album. Hear The Light started it all for a band that would go on to have an immeasurable impact on Christian rock and metal. In honor of the 40th Anniversary of Barnabas, all 5 albums will be re-issued by Retroactive Records in 2017! The re-issues feature a complete remaster by Rob Colwell of Bombworks Sound, guaranteeing the album has never sounded better. This treasured classic is packaged in a jewel case with a 12-page booklet insert featuring write-ups, band history, band pictures and lyrics that make sure the album has never looked better! A must have for fans of Agape, Resurrection Band, Daniel Band, Motorhead and Jerusalem! ” -Retroactive Records

TRACK LISTING:
Saviour
There’s A New World Coming
Directory Assistance
Little Faith
He Loves You
B.C.
Playin’ For Him
No More Blues
Father Of Lies (A Song About The Other Guy)
It’s Up To You