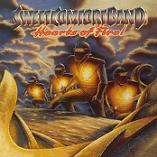 “Sweet Comfort Band was one of the most original, proficient Christian bands to come out of the Jesus Music revival of the 70’s, producing two of the most important releases of that decade. As the band launched into the 80’s, SCB began reinventing themselves with a sound and message that would broaden their appeal and make them mainstays of Christian pop. Originally released in 1981, Hearts Of Fire mixes ballads, funk and all-out rockers to provide what John Styll (Editor, CCM Magazine) proclaimed the best Sweet Comfort Band album this far! ‘Isabel’ sparkles with catchy hooks. ‘They Just Go On’ is hopelessly melodic and ‘The Contender’ is chock full of power chords! As an added bonus, the songwriting of both Duncan and Thomas begins to mature on this release, avoiding clichés and exhibiting an honest focus on emotion not very typical in Christian music from this era! This Limited Edition re-issue comes packaged in a full color digipak with enhanced original artwork and is properly remastered for a high quality audio experience!” -Retroactive Records

TRACK LISTING:
Isabel
You Can Make It
They Just Go On
The Road
Feel Like Singin’
Now Or Never
Can You Help Me?
Contender
Just Like Me
You Need A Reason