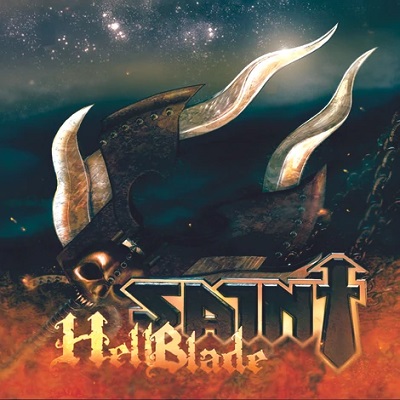 “A powerful storm took place in 2010 and at the center of that storm was the album from Oregon headbangers SAINT. Hell Blade (the band’s 8th studio album) hits the stage with all guns blazing and ready to take no prisoners. This disc is a tremendous heavy machine that is hitting on all cylinders as the band has assembled a massive array of heavy metal thunder. Josh is in all his full-throated glory, Jerry Johnson’s guitars are forthright and dominant, Richard Lynch’s bass work is enormously huge and the drums drive and plow the listener into total submission. Energy just oozes out of the performances. Hell Blade is a masterpiece and the band has literally never sounded better. Saint released the legendary Warriors Of The Son album in 1984. As the flagship band of Pure Metal Records in the 80’s, Saint proved they had the look, the sound and the mystique to win over fans of heavy metal. With each successive release the band has continued to amass one of the most loyal and dedicated fan bases in Christian metal history. Saint is one of a handful of Christian metal bands that are spoken about with hushed reverence. With Hell Blade, Saint straps on the leather and studs to prove that a veteran band can give fans the best release of a stunning career! We present a must-have CD re-issue – remastered by Rob Colwell of Bombworks Sound and the expanded booklet serious collectors crave (and jewel case). For fans of Judas Priest, Dokken and Messiah Prophet!” -Retroactive Records

TRACK LISTING:
The Ascent
The Blade
To The Cross
Crying In The Night
Hell Train
Endless Night
You And Me
New World Order
SinnerPeace
Hell Blade