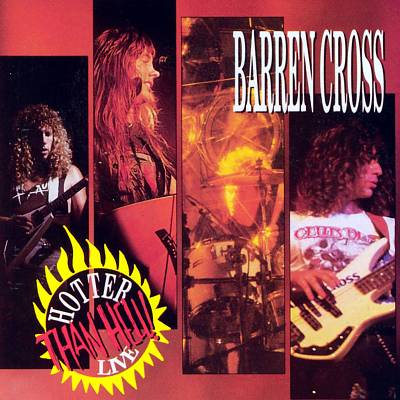 “Nearing the end of relentlessly touring the Atomic Arena album, and having only two releases under the band’s belt, Barren Cross pulled into the International Ballroom in Pico Rivera, CA, to record this game-changing live release. For many, Barren Cross defined “heavy metal” and Hotter Than Hell! Live only confirmed that conviction. Studio albums are supposed to be produced, calculated and pristine. Live albums are supposed to let the band breathe and let the musician’s talent and expertise shine though with no filters. That’s exactly what happens with Hotter Than Hell! And that is why the band comes across like a full-throttle freight train – louder and more theatrical with an elite vocal performance and exquisite shredding guitars creating a metallic landscape making any metal fan feel compelled to instantly shoot up the Dio metal horns. The album also gives bassist Jim LaVerde the chance to thump his bass into oblivion, wielding his axe to some very memorable moments. Also included are two songs not found on any other Barren Cross release: “Opus To The Third Heaven” which is an all-out band jam and might be their most artistic and creative venture ever. The second unreleased track is “King Jesus And Blues Jam” which is a bluesy metal romp with non-stop soloing and elite axemanship. What cannot be denied is the sheer quality of every song on this live album as it includes 14 of the most important metal anthems that impacted the lives of metal fans in the 1980s. The 2020 Retroactive Records re-issue gives this powerful album the deluxe treatment it deserves with an expanded booklet and a brilliant remaster that allows the magic of the original release to impact the listener more powerfully than ever before. So never forget “He’s the rock, the great I Am, the reason why we sing, he’s the King of kings, the master of all things, the power and the source, the everlasting force.” -Retroactive Records

Limited Edition of 1000 units and including a 12-page booklet with rare band photos and all the lyrics.

TRACK LISTING:
Imaginary Music
Dying Day
Killers Of The Unborn
Close To The Edge
Going Nowhere
Dead Lock
Opus To The Third Heaven
King Of Kings
In The Eye Of The Fire
Rock For The King
Light The Flame
Terrorist Child
King Jesus And Blues Jam
Give Your Life