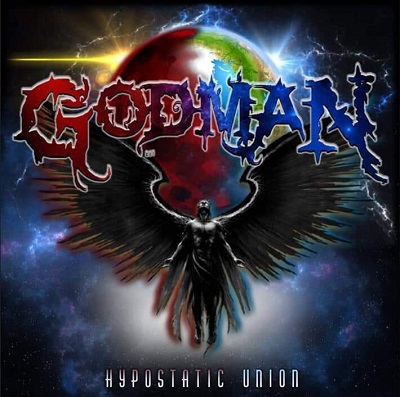 “Godman is the musical union of 2 well known, veteran musicians in the Christian metal world- Tiago James de Souza (Hand Of Fire, Perpetual Paranoia, Through The Clouds) and Jonathan Johnson (Sacred Warrior, Deny The Fallen, Zeal). Rounding out the lineup is Corey Sturgill, the former drummer for Universal/Republic recording artists Flaw. Though Jonathan and Tiago are known for their previous work and trademark sounds, Godman is a completely unique entity with a sound unlike anything either have done before. Extremely heavy and powerful and nearly impossible to define. Drawing on both writer’s massive assortment of influences, this is a no holds barred barrage of intensity, wrapped in a blanket of melody and groove. Somehow completely modern and classic simultaneously. It is rare in this day-and-age to find something in heavy music that sounds like nothing else. Godman does just that, while feeling completely familiar at the same time. Produced by Jonathan Johnson, Godman’s debut album Hypostatic Union on Bombworks Records has an extremely high-end, modern production that compliments the sheer power of this band. This musical union is already taking the heavy music world by storm. The vocals and progressive metal bring to mind thrash legends Believer, while the sheer heaviness and technical tenacity will appeal to fans of Origin, Godflesh, Soilwork, Shadows Fall and Suffocation.” -Bombworks Records

TRACK LISTING:
Reset
Last Man Standing
Effigy
Illuminati
Who I Am
Dark Night Of The Soul
End Of My Days
The Rescue
Babaylon