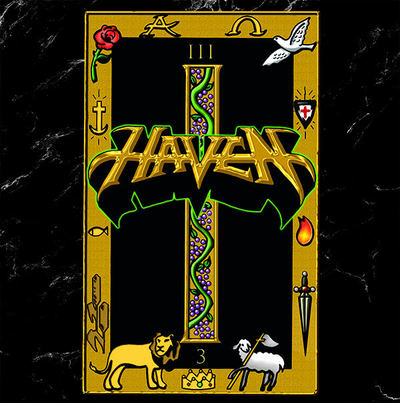 “Originally released by the band independently in 1995, four years after the sophomore release Age Of Darkness. The album was pieced together by golden throat vocalist Kevin Ayers as various members of the band were available over the four year period. Also, gone are the million dollar studios and producers that recorded the first two Haven classics. Haven III was recorded in Kevin’s home recording studio in his garage in the 90’s! In the words of the supreme metal historian Scott Waters (Ultimatum), ‘Despite the four years between releases, the music has not changed dramatically. As with past albums, however, the lyrics are awesome, although they are a bit more praise oriented rather than some of the more social lyrics of the past.’ With 8 of the 13 tracks tracking in at 6 – 7 minutes, you know you are in for a tremendous melodic, progressive power metal adventure! This Retroactive Records re-issue has been carefully mastered for vinyl by veteran Rob Colwell (Bombworks Sound), pressed on collector-quality heavy-weight vinyl and comes with a 12″ x 12″ insert with lyrics. For fans of Sacred Warrior, Iron Maiden, Recon and Queensryche!” -Retroactive Records