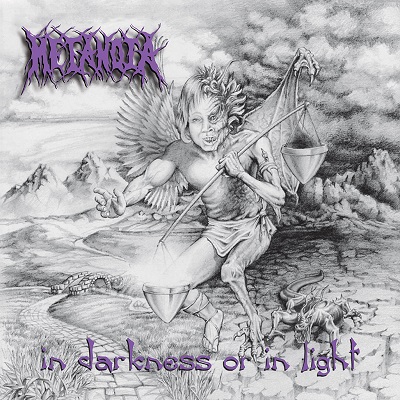 In Darkness Or In Light (VINYL)

Soundmass are happy to be releasing “In Darkness Or In Light” on VINYL for the first time ever! Remastered for vinyl and with the original cover artwork in full-sized splendour, this pressing – only 85 copies on black vinyl – is a must for fans of Metanoia.

Australian band METANOIA was started in 1990 by guitarist Steve Bennett with a simple vision of reaching those involved in heavy metal that would never step into a church building. That year the band started to play live and recorded a demo in their lounge room with Steve also on vocals. With Yowie replacing Steve on vocals, late 1994 saw Metanoia record and distribute their “Screaming Fetus” demo, which got them voted in the Top 20 Australian Unsigned Bands by Hot Metal Magazine. This demo also saw them take a change in musical direction to their trademark brutal death metal. In 1995 they recorded their even heavier down-tuned “Akeldama” demo with its rumbling bass and thundering guitars (and a didgeridoo!) Their appearance on the “Raise The Dead” compilation CD resulted in the band signing a 3 album contract with Rowe Productions (Steve Rowe/Mortification). Recorded in 1995, “In Darkness Or In Light” was the first of these albums and their first full-length. Metanoia created a lot of interest with this debut due to their unique approach to death metal – it was old-school but also had thrash and heavy metal influences showing through. With “In Darkness Or In Light” they created an album that was heavy-as-stink, fast-n-furious grinding death metal, yet still full of epic melody and groove. And to top it off, Yowie’s deep, DEEP guttural growl was inhuman! If you like your brand of extreme metal different and diverse, then Metanoia is your band!

TRACK LISTING:
Side A
Acute Obliteration
Enslavement
In Darkness Or In Light
Dead Flesh
Torn By Dogs